Growing up in Glendale, Arizona Duncan found his love for pottery at the age of fourteen in a grade 9 ceramics class. From the beginning he was hooked by the responsive nature of the clay as well as the wonderful satisfaction of creating permanent, fired, forms from the impermanent soft clay. 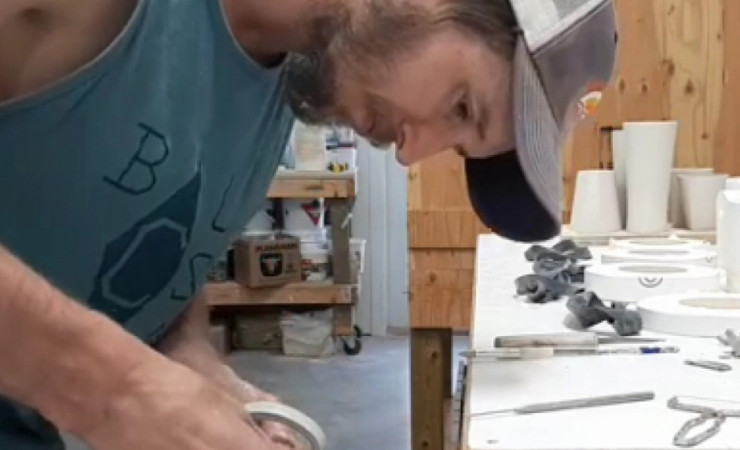 Taking another ceramics course each semester of high school he refined his technique and developed a very intuitive understanding of the ways that clay can be manipulated. In the spring of his final year he had the opportunity to apprentice under a full-time ceramic artist, Joseph Woodford, in nearby Chandler, Arizona. This afforded him the opportunity to study the techniques of a professional artist as well as foster greater understanding of what it takes to thrive in the fine arts community.

From there Duncan continued his study of ceramics at Northern Arizona University receiving both a Bachelor of Fine Arts in Ceramics and a Bachelor of Science in Business Administration emphasizing in Management. During his study he participated in many national exhibitions, received multiple scholarships for his creative endeavors, and exhibited for several years at multiple local galleries. It was also during this time that Duncan increased his appreciation for nature becoming an avid rock climber, mountain biker, and whitewater raft guide in the Grand Canyon. Many of his surface and forms can be directly traced back to the tumultuous lines of whitewater rapids or the smooth curve of a rounded river rock. Northern Arizona University has one of the largest woodfired kiln facilities in North America, with eight woodfire kilns at the time of Duncan’s graduation. This coupled with the numerous other atmospheric kilns ushered in a new aesthetic involving the subtle color changes of flashing on bare clay and running, ashy, drips from the natural deposits of the kiln.

Upon graduation Duncan moved to Salmon Arm, BC to teach pottery at The Workshop: Studio and Gallery. Teaching ceramics allows for an ongoing creative dialog with his students and an ever-increasing repertoire of forms and surfaces. Since moving to BC the aesthetic of atmospheric firings has continued to be at the forefront of his ceramic design. Through the use of multiple sprayed glazes he achieves very similar results to the atmospheric firings of a wood kiln without the significant loss of work that can sometimes be associated. This process, while time consuming, gives Duncan a great degree of control over the finished surface and still occasionally affords unique and serendipitous results.